A Winemakers Wife – zambARTas, when ART is in the name

A Winemakers Wife – zambARTas, when ART is in the name 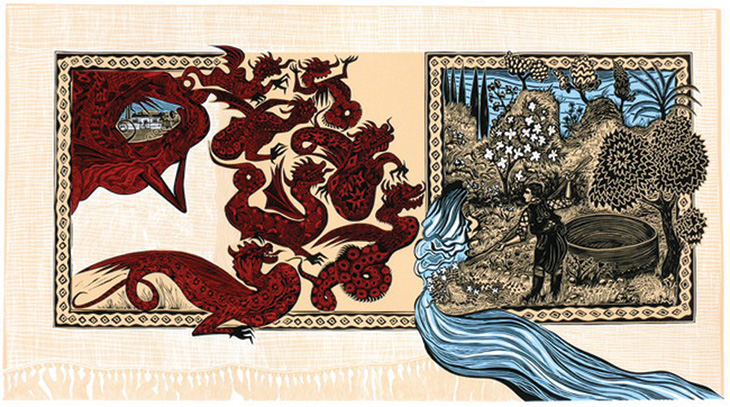 Yes it is the ‘art of winemaking’, that makes a good wine, we all know that. But that is not the type of art that I want to share with you in this story. I would like to write about ‘art’ as we know it; fine arts, paintings, drawings, expressions of creativity and philosophy. Does being surrounded by those during wine production help make a better wine? Nobody knows, but it certainly creates an inspirational environment to work in.

Many of you who have visited our winery over the years have been impressed and intrigued by the big collection of art hanging on the walls. They were collected by my late father-in -law Akis, who had a big passion for arts. Maybe not many of you knew this side of his personality, as he was not very outspoken about it, but he was a secret admirer and collector of fine arts.

The beauty of the collection that he gathered is that the paintings are not a random collection of pieces purchased at auctions or galleries. Most of them come from friendships with the artists, the majority of them Cypriot and considered some of the greatest of their artistic generation.

Three of them deserve special mention, as they not only catch the eye once entering the winery; they also say something about Akis’ life and friendships.

Akis met Christos Christou during his years in France while studying chemistry. Being students during the roaring late 60’s/early 70’s in which arts, literature and life styles were radically changing, they developed a friendship. Christou studied at the École Nationale Supérieure des Beaux–Arts de Paris and after graduation became a professional artist. His work is characterized by a dream-like surrealism that recalls early renaissance frescoes with sculptural forms. We are proud to have 6 pieces of this very talented artist here at the winery.

Stelios Votsis is a name very known among the art scene in Cyprus and considered one of the leading figures in Cypriot modern art. He studied at St Martins School of Art in London and his works are very much a reflection of Cypriot modern history. His expressive and radical paintings are now in collections all over the world. Read his obituary here.

The biggest part of our art collection comes from Akis’ dear friend Hambis Tsangaris, Cyprus most well-known print maker, and founder of his own school and museum in Platenisteia Village. I personally met Hambis numerous times when he dropped by at the winery. His always warm and friendly smile, soft and engaging way of speaking and passion about Cypriot culture are immense and hard to ever forget. We feel that his art work is part of the soul of our winery and represents a part of Cyprus that we truly love.

We feel lucky to have the works of these inspiring people at the winery, because they represent the heart of Cyprus’ fine arts culture and we feel proud to show them to our visitors in our small winery. After all the most valuable gems are hidden in unexpected places…

I recommend you to visit Hambis printmaking museum & school in Platenisteia Village, just north of Pissouri into the hills. http://www.hambisprintmakingcenter.org.cy/el/

The newly build Leventis Art Gallery Nicosia, which is home to an impressive collection of local art as well as international art, is also definitely worth a visit.  www.leventisgallery.org 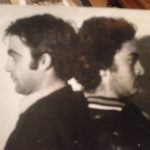 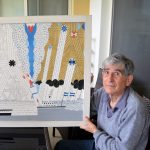 Mr. Stelios Votsis with one of his works at Zambartas Wineries in 2011 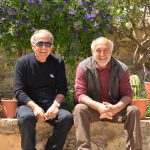 Akis & Hambis together in Crete