A Winemaker’s Wife – Australia in our heart!

A Winemaker’s Wife – Australia in our heart! 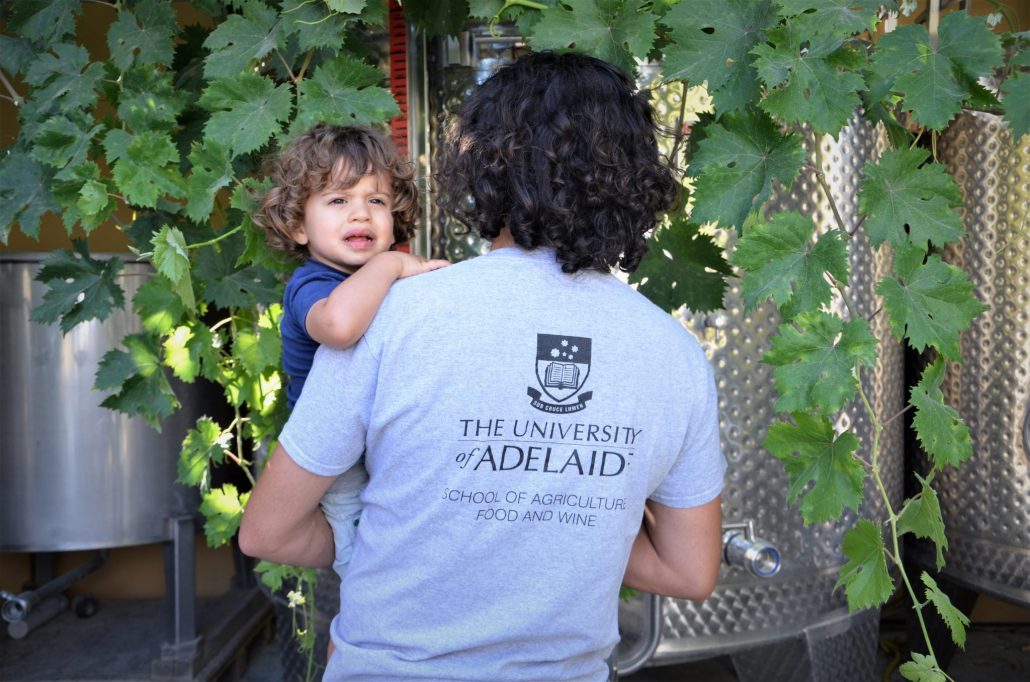 The visit of our Australian friends last week to Cyprus, threw Marcos and I back in time 10 years (!), to the place where our story started.  Down under, between the vines and kangaroos, Marcos became a winemaker and I entered the Zambartas story.

Australia is really at the heart of our winery and family in many ways. It was Marcos bold decision to study winemaking there, instead of in Europe, and fly to the other side of the world for almost 2 years to learn the craft. He got accepted at Adelaide University and spend many hours studying with his class mates from all corners of the world. He learned that making good wine is a science and at the same time acquired his no-nonsense approach to the job. Hands-on, hardworking and not losing focus, are what I believe are the trademarks Australian trained winemakers.

Marcos and I met there, as I enrolled in an exchange semester studying History and lived in Adelaide for 6 months. We first met over a few beers along with our friends, but I soon turned to wine and a whole new world opened for me. At that time, the winery here in Cyprus was nothing yet, but an architectual drawing. I also still remember the one picture decorating Marcos’ student room; a print out of a bottle of ‘Zambartas Rose’; to remind himself from time to time what he was spending all his hours studying for.

Besides the many hours of studying Marcos did (I did much less to be honest), we got the time to visit some fantastic wineries in McLaren Vale, the Adelaide Hills and of course in the famous Barossa Valley. From the famous big boys such as Penfolds to exciting small boutique wineries such as Samuel’s Gorge.

One day a group of ‘winemakers-to-be’ and friends gathered at 5 AM in the morning, to visit a winery called ‘Noon’, which only opens 1 weekend per year and sells all its production in that weekend. Yes… people were queuing at 5AM to get their hands on maximum 12 bottles of wine per person. Not only that, when the gate opened, people started running and we saw people pushing…. In my down-to-earth Dutch approach I thought this was bit too much, but I nevertheless enjoyed the day out, especially the BBQ breakfast (with sausages, bacon & sparkling shiraz) in the vineyard at 6 AM.

We also got introduced to Australian wine packaging standards, where 150 dollar bottles are put under screwcap and Marcos’ secret preference for screwcaps was created. We ran into wine labels with names such as ‘bitch’ and ‘my father in law’, unthinkable in Cyprus back then and even now. Marcos was even daring (or stupid?) enough to order a wine called ‘dirty girls’ on one of our first dates. It turned out to be a great Semillon and a fun date!

On the many BYO BBQ’s (stands for Bring Your Own Barbeques) there was a lot of beer (‘It takes a lot of beer to make good wine’ the Australian winemakers say), fantastic wine, kangaroo meat and strong humour. Friendships were created and we are now blessed to have winemaking friends all over the world.

A fantastic time, when lasting memories were made. A time that brought Marcos his knowledge and experience to build the Zambartas brand.  A time also, that was the beginning of our family. Funny enough, Sebastian, up to last week had no favourite teddy to sleep with. Until he was given a kangaroo as a present. ‘Skippy’ now goes everywhere with him; as if he knows his ‘roots’ and maybe his future?